Last Updated: July 8, 2022Once your Gantt Chart is uploaded into the Gantt chart, you can now do the following:Edit individual task informationCreate dependenciesViewing the Critical PathNest and create task hierarchySchedule each task accordinglyAssign roles and resourcesUpdating task progress and adding completion rateEditing task details on the Work PlanOpening the Task EditorThe Task Editor allows you to change every detail in your task. 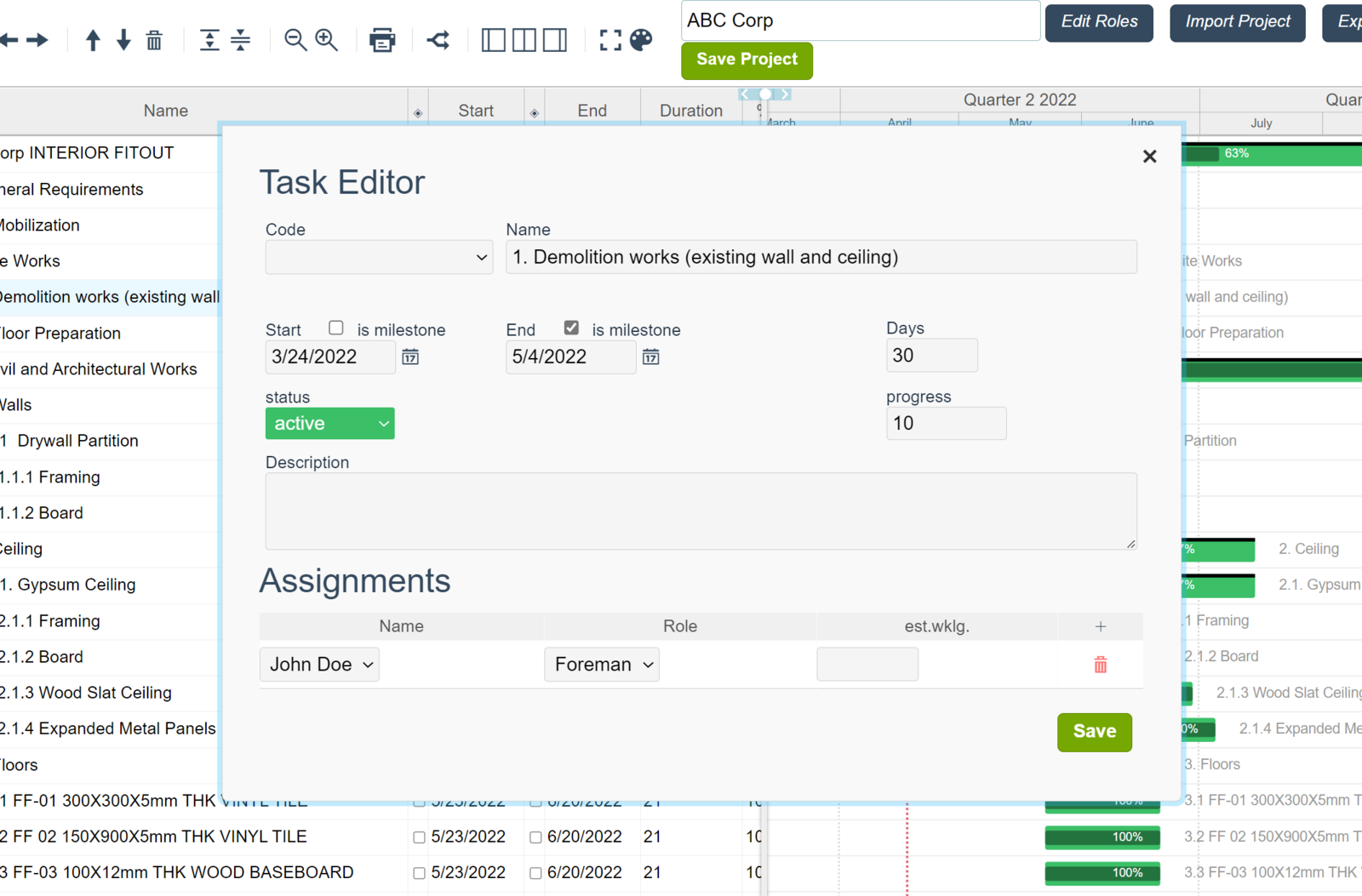 Or, you may directly edit a line item on the Work Plan by clicking a cell.

For example, let's say task on row 6 (Floor Preparation) is dependent on the row 5 task (Demolition Works). In other words, the task on row 6 can only start once the task on row 5 is 100% complete. With the Gannt chart, we can automatically set the order and sequencing of tasks by setting up dependencies.How to set up Dependencies:Select a task in the Gantt chart that you want to set a dependency.On the selected task, click on the cell under Dependency column and enter the row number where you need the task to be dependent on.

On the Gantt chart, you will see that the task's progress bar has moved right after the task that it is dependent on. An arrow also appears to indicate that these two tasks are to be accomplished sequentially.

Another way that you can set up dependencies is by dragging and dropping a task to another task to create a dependency sequence: On the Gantt chart, hover your mouse over a task's progress bar:

You will see two blue solid circles appear on both ends of the project bar. You can drag and drop each of these circles to any task progress bar to create a task dependency sequence on your Work Plan Gantt chart. The placement of each circle means:left blue circle: the task will follow any task it will be linked toright blue circle: the task precedes any task it will be linked to

Keep in mind that creating a dependency makes the Start Date of a dependent task to become uneditable.Viewing the Critical PathOn Steer, you can view the Critical Path based on the parent tasks you have created. These are highlighted in red in the Gantt chart.

Nest and create task hierarchyYou can create Parent tasks or Task subgroups using the Indent actions. Once you indent a task, it automatically becomes a Parent task that allows you to group tasks of the same category and split any sub-tasks under it.

Indenting a task pushes a task up one level, where the task before it automatically becomes a Parent taskUnindenting a task pushes a task down one level where it either becomes a Parent task or a member of a task subgroup.Scheduling the Project and TasksThe first row of the Work Plan Gantt chart automatically takes the name of your project and schedules it accordingly based on the task in your project with the latest schedule.

On the Project level, you may only schedule its Start Date since its End Date depends on the latest scheduled task in your project.On the Task level, you may schedule each task by clicking the Start Date and the End Date cells to select a date using the calendar view.Take note that Parent tasks or Task subgroups has the same scheduling rule with Project level scheduling. Their End Dates are uneditable and depends on the latest scheduled task under it. You can set each task's duration in days in the task list pane Under the Duration column of the task, enter the amount of days that the task will take and it will update the length of the progress bar in the Gantt chart. Or, you may also drag a task's duration in the Gantt chart: On the Gantt chart, hover your mouse over a task's progress bar.

Then, click and drag it left or right to adjust the date of the task.Once done, the task's Start Date and End Date in the task list panel should be updated automatically.Assigning roles and resourcesOn Steer, roles refer to the function of each resource involved in the project's completion. For example, a role can be the title of Site Manager or Laborer, which can be assigned to a person responsible for task. First, you need to create a role:On the topmost panel of the Work Plan Gantt chart, beside the Project Name, click on Edit Roles.

This will open the Project Role window where you can start adding roles into your project. Once done, click Save. 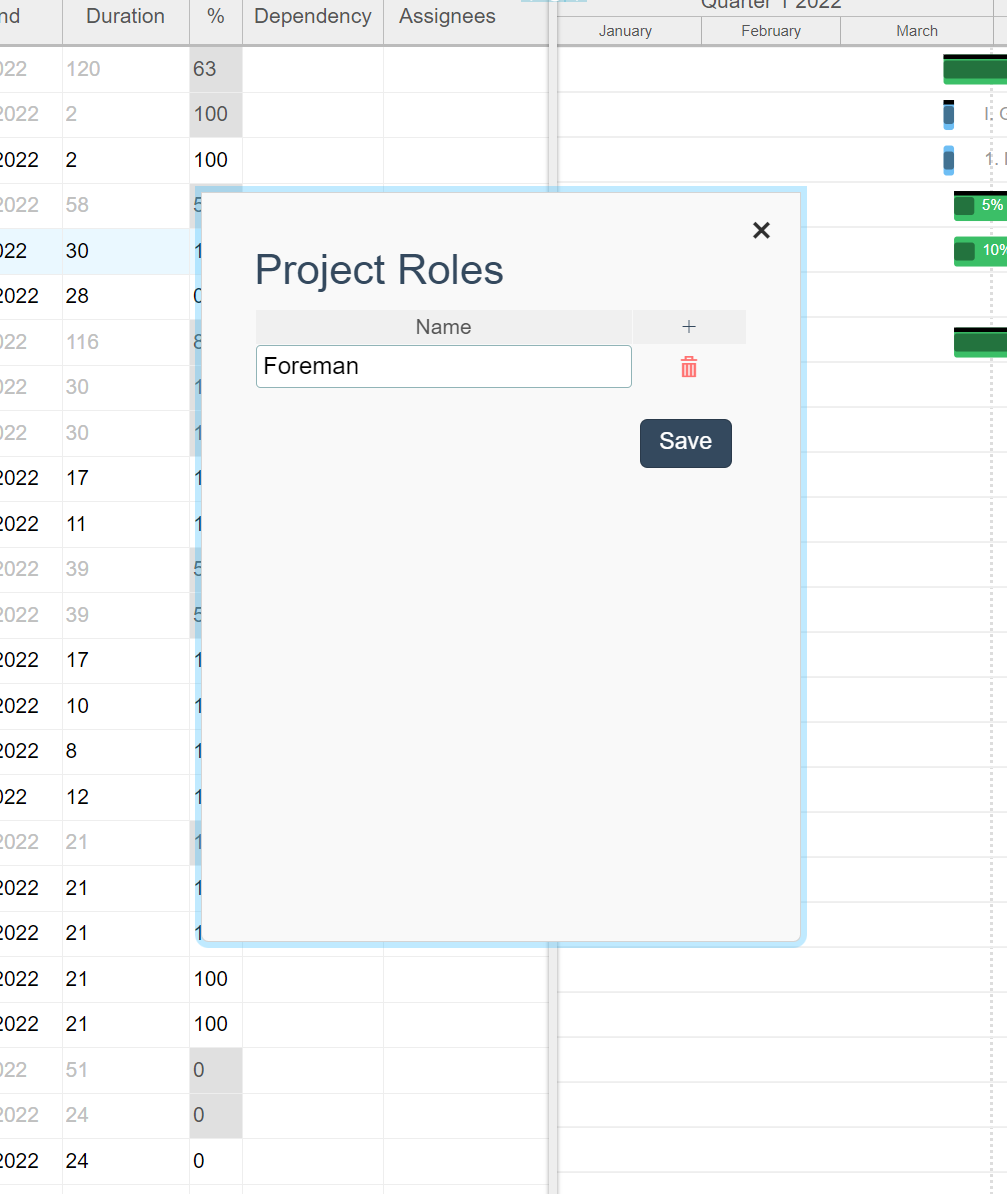 Then, add resources:On the top panel of the Work Plan Gantt chart, click the second to the last icon on the right to Edit Resources. 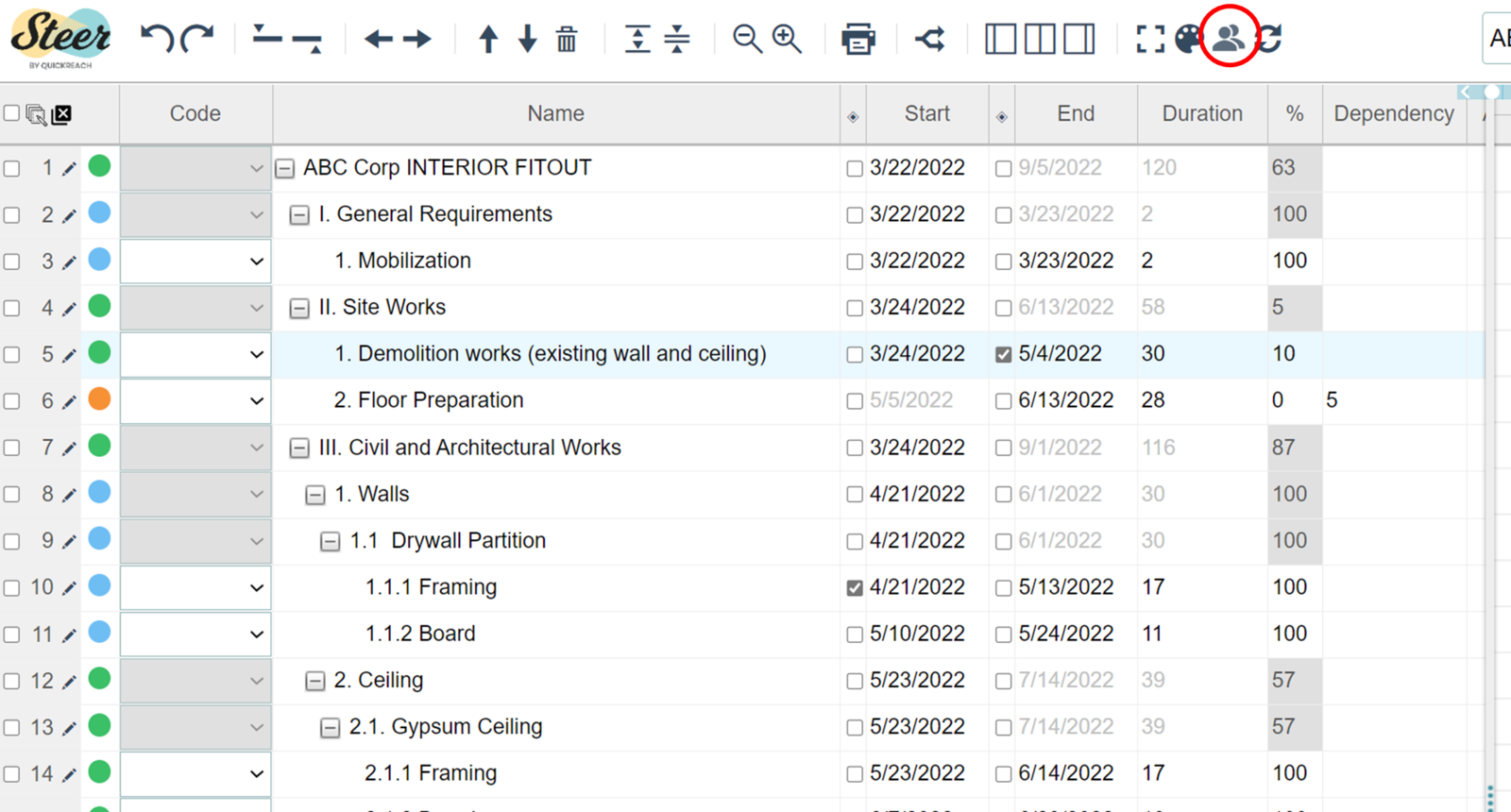 Add resources to the list as necessary and click Save. Once you are finished adding roles and resources, you can now assign them to a task: Select a task on the Gantt chart where you want to assign a resource.Double-click its cell under the Assignees column.

This will open the Assignments window and you can start assigning all necessary resources to the task and add their estimated worklog in hours. 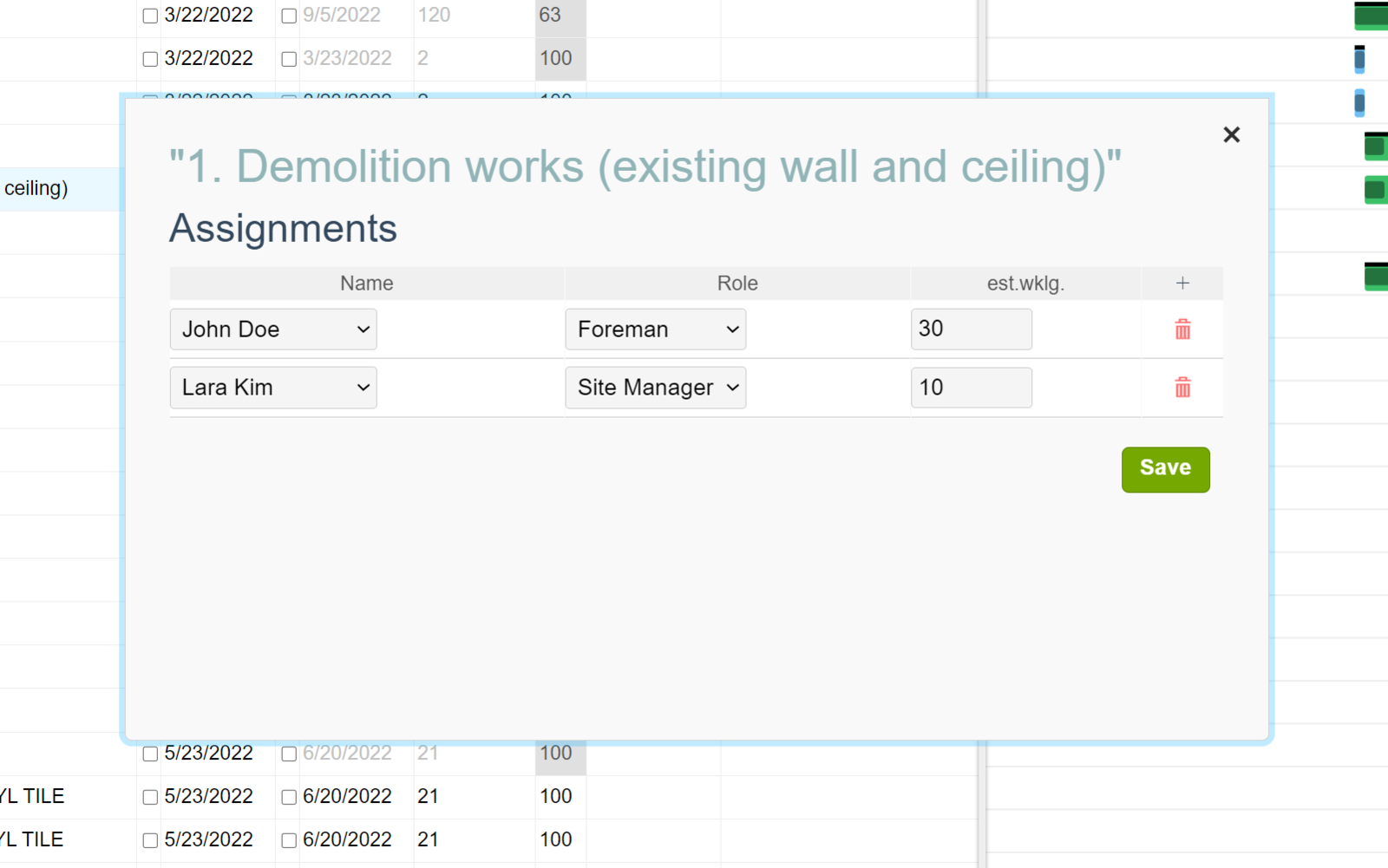 Updating task progress and adding completion rateMarking a task as complete changes its color from Green (Active) to Blue (Complete). This is important for Inspectors and Developers to track which tasks need to be inspected for reviewing and work package billing.To do this:Select a task on the task list panel where you want to mark the task as Complete.On the task's % column, enter the progress percentage from 1-100.Any number from 1-99 updates the task's progress bar.Entering 100 marks the task as Complete and changes its color from Green to Blue.All completed tasks also notifies the Inspector that the task is now for Inspection.

Next Category: Steer Quality and Safety for ContractorsPrevious Article: Uploading a Work Plan to the Gantt Chart Need more help? Send us an email at customersuccess@quickreach.co, or send us a message on the chat widget.

Was this article helpful?